At Whisk, we specialize in creating smart food experiences, and that requires a deep, data-focused understanding of the ingredients that go into every single recipe. Accurately classifying and grouping these ingredients is incredibly important, which is why we use AI and Machine Learning, along with human intellect, to help improve our understanding of the complicated food nuances that are inherent in many recipes.

Today, we’re diving into the complexities of one of the world’s most popular ingredients: cheese. Nutritious, convenient, and versatile, cheese represents about 30% of total dairy product sales globally. From Cheddar to Parmesan, cheese comes in a variety of flavors, textures, and forms—each unique in its own right and noticeably different from the next. As we explore the intricacies and interesting facts about cheese we hope you’re able to learn a thing or two along the way.

Cheeses are grouped together in a variety of ways including the length of fermentation, texture, methods of production, fat content, type of animal milk used, and country or region of origin. Although there is no single, universally used method for classifying cheese, the most common and traditional classification is determined by moisture content.

Soft cheeses have the highest moisture content, 55% or more. These cheeses are creamy in texture and mild in flavor. Popular soft cheeses include Cream Cheese, Ricotta, and Brie, commonly used for spreads, dips, or as toppings on pizza and casseroles.

Hard cheeses typically have a moisture content between 35% and 39% and are usually aged between 6 and 18 months. Dry, sometimes even crunchy in texture, these cheeses are known for their potent and deep savory flavor. Typically paired with jams or grated on top of pasta, popular hard cheeses include Gouda, Cheddar, and Gruyère.

Extra hard cheeses have the lowest moisture content, usually less than 30%, and are dry and granular in texture. Although produced similarly to hard cheeses, these cheeses are aged longer, sometimes up to as long as 30 months. Popular extra hard cheeses include Parmigiano Reggiano, Reggianito, and Sbrinz, which are known for their strong and specific flavor.

A Deeper Look Into the Intricacies of Cheese

From the half a billion recipe interactions that take place on our platform every month, we’re able to deepen our understanding of exactly how people around the world enjoy popular cheeses in every flavor and form.

A Cheese with Many Names

With over 1,800 varieties of cheese, it’s no wonder there’s often variation—and confusion—when it comes to calling certain cheeses by the “right” name. Just as “Champagne” can only truly be called that if it comes from the region of Champagne, France, cheeses like Parmesan follow similar rules due to their protection under European law. However, because these laws don’t extend to countries like the U.S., cheese manufacturers often label their products as Parmesan, despite the fact that these cheeses don’t meet the strict ingredient and production standards set forth by the EU—leading to a variation in names. Similarly, Monterey Jack cheese goes by many names, such as “Jack cheese” and “Monterey.” When considering different blend varieties, things get even more complicated. Is it Pepper Jack or Monterey Jack with jalapeno peppers? With all the variations around the different varieties of cheese, Whisk’s AI takes these intricacies into account. So, when a recipe calls for Pepper Jack, Whisk’s AI knows that a product labeled Jalapeno Jack is also a great match, or that a recipe calling for Parmigiano Reggiano can also be matched with a product labeled Parmesan. Who knew the correct classification of cheese could be so important?

In the U.S., perhaps unsurprisingly, Cheddar cheese is overwhelmingly the favorite, with 45% of hard cheese products in recipes being Cheddar. With different varieties of sharpness, Cheddar is a versatile cheese that can easily be incorporated into an almost endless amount of dishes, from casseroles to soups. If we take a closer look at exactly what form of Cheddar is being used, we see that Shredded Cheddar is used in 63% of recipes, as opposed to sliced, which only shows up in 0.5%—a fairly drastic difference.

In terms of sharpness, it seems most recipes call for Sharp Cheddar cheese—as many as 28%—followed by Mild Cheddar at 2.3%.

However, because sharpness is synonymous with age, this adds to the complexity of names, as Sharp Cheddar may also sometimes be referred to as old, strong, or mature when called out in recipes. Interestingly enough, even though Cheddar is naturally white in color, only 2.4% of recipes specifically call for White Cheddar. Yellow Cheddar, on the other hand, which gets its deep yellow-orange tint from annatto—a commonly used natural food coloring additive—is not often specified in recipes. Since there is no difference in taste between White and Yellow Cheddar, this means that home cooks can choose which color cheese to use based on their preference.

When we compare cheeses across the different regions of the U.S., it’s no surprise that many cheese lovers hail from the American Heartland. In fact, the Midwest is home to the largest concentration of cheese creameries in the country. The Midwest state of Wisconsin alone produced over 3 billion pounds of cheese in 2017, 25% of America’s cheese. The state houses 129 cheesemaking plants producing more than 600 types of cheese. The most commonly produced cheeses in the Midwest include Cheddar, Gouda, Gruyère, Swiss, and other alpine-style cheeses—a remnant of the region’s European immigrants who settled in the area due to its suitability for dairy farming. As most of these are hard cheeses, it makes sense then, that out of all the region’s in the U.S., Midwesterners cooked recipes in which 70% called for hard cheeses. Similarly, when it comes to softer, fresh cheeses, like Ricotta and Mozzarella, we see Northeasterners using the most soft cheese in recipes, perhaps due in part to the large Italian influence in the area.

A Country Deeply Rooted in Cheese

When we observe regional differences according to specific types of cheese, we see that overall Parmesan rules in the U.S. Among Italian cheeses, Parmesan cheese is often referred to as the “King of the Italian cheeses.” Many recipes call for the cheese to be used within sauces, as a topping to pasta, pizza, and other dishes, and as an addition to cheese boards. Parmesan has the strongest presence in the Northeast followed by the Midwest, two regions of the U.S. that saw an influx of Italian immigrants in the late 1800s and early 1900s. Interestingly enough, Mozzarella—despite its Italian roots—does not seem to be as popular as Parmesan, perhaps due to its shorter shelf life. Another interesting insight is the popularity of Cream Cheese in the Southern and Midwestern states. Often used to make creamy dips, casseroles, and desserts, Cream Cheese is a key ingredient in many dishes. Whether it’s a Southern staple like pimento cheese or a Midwestern classic like the cheese ball, Cream Cheese is a common base for these popular recipes, a potential indicator of their popularity in these regions.

As we look deeper into how different cheeses are used across recipes and the particular nuances that surround this staple ingredient, we learn how we can further improve the Whisk technology powering consumers’ food experiences. We hope you enjoyed learning more interesting facts about cheese.

Read Next See All 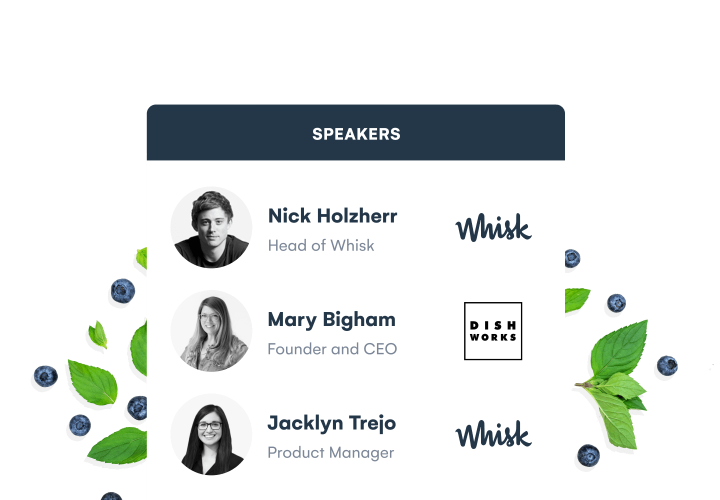 Learn how to optimize your recipe content to reach new audiences and drive repeat engagements.

Get Whisk news and product updates on how you can engage customers and drive growth for your food business.