The Chinese Spring Festival, also known as the Chinese New Year, is a time of vibrant red lanterns and colorful lights. But, the celebration isn’t just about the decorations, there are several customs and rituals that come with the arrival of the Lunar New Year.

We caught up with Shan, one of our Whisk creators and the resident Whisk expert for all things Chinese. Shan is originally from a small rural village outside one of China’s largest cities named Chongqing. The food of this mountainous region is known for its legendary spiciness and delicious hot pot creations. So who better to ask about Chinese New Year traditions and foodie recommendations?

As with any traditional holiday, observance varies depending on the individual, but in every case, food is heavily present during the celebration of the Chinese New Year. Family dinner on New Year’s Eve is a must, the feast includes meat, fish, vegetables, fruits, snacks, etc.

To celebrate this Lunar New Year, why not try some traditional Chinese New Year recipes? Here’s what Shan tells us HAS to go on your dinner table.

The pronunciation of fish in Chinese is close to “surplus”, meaning an increase in prosperity. So fish always makes an appearance on the New Year table. Tuck into this one in celebration of the year of the rabbit.

Dumplings are a must for Lunar New Year because they symbolize wealth. There’s a lucky saying which goes with them, a wish for making money and amassing a fortune. Translated, it means something like ‘bringing in wealth and treasure.

Chicken is a homophone for ji (吉, meaning ‘good luck’ and ‘prosperity’). That is one thing that makes it such a welcome dish at reunion dinners. Chicken is usually served whole — head and feet included — to symbolize ‘unity’ and ‘wholeness’, while also signifying ‘a good beginning and end’ to the year. This time, though, we’ve gone with a wonderfully popular General Tsao chicken which is fit for any celebration.

One popular recipe to try is sweet rice ball, also known as Tāngyuán, it is a traditional food for China’s Lantern Festival. Shan’s family tradition is for a coin to be hidden in one of the dumplings. Whoever gets that dumpling will attract good luck for the upcoming year. Very similar to some countries’ tradition of coins in Christmas pudding! Sweet rice ball (汤圆 Tāngyuán /tung-ywen/) is the main food for China’s Lantern Festival, however, in south China, people eat them throughout the Spring Festival. The pronunciation and round shape of tangyuan are associated with reunion and being together. That’s why they are favored by the Chinese during the New Year celebrations.

And don’t think you’ll be getting away from the green side of things. Vegetables are also a staple in the Chinese New Year dinner menu, as they symbolize spring, renewal, energy, progress, and wealth. But not just any vegetables! Traditional vegetables for Lunar New Year are picked for a reason. That’s why you’ll typically see these three dishes on the dinner table:

What else happens on Lunar New Year?

Aside from the feasts, there are a few other traditions which are part and parcel of Lunar New Year celebrations.

As you can see, the Chinese Spring Festival is not just about vibrant red lanterns and colorful lights. It’s a time filled with customs and traditions that help bring good luck and prosperity for the year ahead. So, whether you’re visiting relatives, watching fireworks, or enjoying a traditional feast, make sure to take part in these customs and rituals to fully embrace the spirit of the Chinese New Year.

Read Next SEE ALL 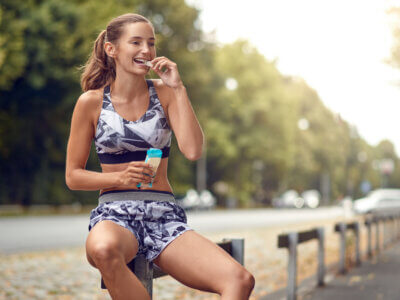 The Best Sources of Protein for Building Muscle

The Best Recovery Meals for Every Type of Workout